In a rear-end collision, active head restraints push forward to reduce the amount of space an occupant's head can move. It's sort of like an airbag for the back of your head (minus the bag part).

Recently, Dodge owners have been reporting that their active head restraints (AHR) are deploying without any collision. And as you can imagine it can be quite startling to be smacked in the back of your head by your seat as you try to navigate traffic.

Unlike most modern issues in your car, this is not a sensor failure, electrical glitch, or poorly written software. This is a cheap part breaking into pieces and wreaking havoc, you know – just like the good ole' days. 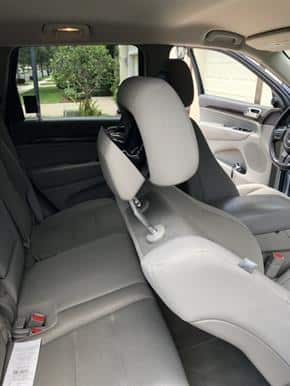 FCA is facing heat for using a cheap plastic bracket to secure the pin that holds the AHR in place. The plastic is busting apart under the prolonged tension, releasing the pin and deploying the AHR into unsuspecting heads.

Resetting an AHR is possible, if it isn't broken ∞

FCA has been known to blame the whole ordeal on poor maintenance which is one of the more ludicrous things we've heard. Is everyone keeping up on their recommended head restraint maintenance? No? Of course you're not because there's no such thing.

FCA also points out that the AHR can be reset by an owner. And yeah, unlike an airbag it is possible. That is, if the plastic inside hasn't shattered into pieces.

Owners who have had to repair or replace their AHR say it costs upwards of $800.

In January of 2019, a proposed class-action was filed in Florida blaming FCA for using defective plastic brackets to hold the AHR in place and making owners pay to replace them, even under warranty.

The lawsuit specifically mentions the Dodge Avenger and Jeep Cherokee as vehicles which see that bracket failure.

The allegedly defective piece of plastic holds a short metal rod that is latched into two metal hooks located on the back of the headrest. Those hooks are attached to a sensor that triggers the hooks on the front and back of the headrest when a crash occurs._
The whole system is in prolonged tension, and the plastic simply can’t handle the stress over time. It also doesn’t show any outward signs of trouble before breaking.

AHR Systems Have Been Recalled for Module Problems Before ∞

This isn’t the first time FCA’s AHR has been in the news. Back in 2013, the Liberty was part of a head restraint recall for 500,000 vehicles due to _ faulty microcontrollers … that could cause the system to fail._

In 2017 the Liberty was recalled again after an internal investigation revealed the occupant restraint control modules can degrade over time.

Neither of these recalls were serious. In the same way a broken escalator just becomes a set of stairs, a busted module just removed the active part and turned them into a normal set of head restraints until repairs could be made.

Maybe you've experienced this problem. Maybe you're concerned you will soon. Whatever the reason, here's a handful of things you can do to make sure it gets the attention it deserves.